Guest blogger Ruari Fangman explores some US research that suggests that an entrepreneur's social skills can affect their business success. 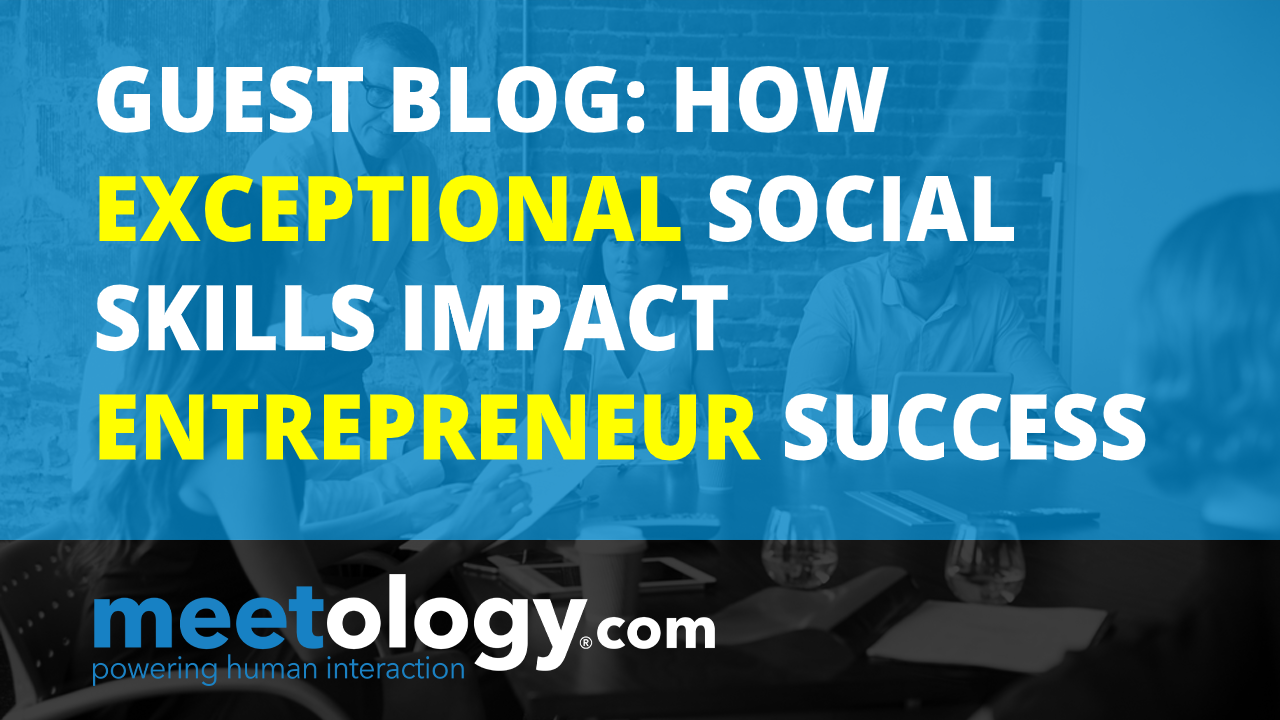 With Jonathan Bradshaw taking his annual break from delivering the weekly ‘Meetology® Minute’ vlogs, we are delighted to share the fifth post from our guest blogger Ruari Fangman. We met Ruari through our partnership with the University of the West of England from where, under the tutorship of our lead psychologist (and Senior Lecturer at UWE) Dr Paul Redford, Ruari has recently graduated with a Msc in Occupational Psychology. You can find more our about what Ruari’s has been up to post-graduation here: www.linkedin.com/in/ruari-fangman-419090110

It obviously takes many things to be a successful entrepreneur – passion, resilience, vision and good networking skills to name but a few, but one factor that has potentially been overlooked is that of effective interpersonal communication. Researchers from New York (1) conducted two studies that aimed to test the hypothesis that that the higher an entrepreneur’s interpersonal competence, (“their ability to interact with others based on discrete social skills”), the better their subsequent financial success. The researchers recruited entrepreneurs from two different sectors, cosmetics and high-tech, and asked them to complete a questionnaire that was designed to measure their interpersonal competencies in a number of different ways.

The results of their study indicated that those entrepreneurs in both industries who scored higher on social competencies also were financially more successful. Of course because they used a self-report measure some might say that there could be other explanations for the findings other than the obvious relationship between social skills and financial performance (for instance it could be explained by saying that more confident entrepreneurs may score higher on social skills because they’re more confident in their own abilities and it’s actually confidence that makes them more successful). The researchers have pre-empted this criticism and used a third group of entrepreneurs who didn’t just rate themselves but were also rated by their peers, eliminating the possibility of the participants egos getting in the way of the results. The findings of the second party of this study also supported the original findings; those entrepreneurs who scored higher on social intelligence were also subsequently more successful.

(1) References and further reading can be found in the ‘Reference’ tab.

References and other relevant studies:

Baron, A; Markman, G; Beyond Social capital: the role of the Entrepreneurs social competence in their financial success. Journal of Business Venturing 18 (2003) 41-60

Lamine, W., Mian, S. & Fayolle, A. 2014, “How do social skills enable nascent entrepreneurs to enact perseverance strategies in the face of challenges? A comparative case study of success and failure”, International Journal of Entrepreneurial Behaviour and Research, vol. 20, no. 6, pp. 517-541.

About the Author: Jonathan Bradshaw

Jonathan Bradshaw researches, presents and writes on the behavioral science powering face-to-face human interaction. He has spoken in over 30 countries and is an award-winning columnist and blogger. Learn more via the website or connect with him on Twitter and LinkedIn.

Sign-up to receive our weekly Meetology® Minute video blog for science-based tips on communicating more effectively with others.